Taplejung: The sound of ‘gunfire’ coming from the bottom of the water pond is heard frequently. It seems quite weird. But the villagers have heard the sound of gunfire. Local resident Dambar Rai admits that he has heard the gunfire sound from the water.

When the ‘gunfire’ is heard from the pond, the upheavals on the surface of the water pond can be observed.

The movement of water ripples are seen on the surface and the volume of water also increases a little. This recurring spectacle caused Timbung Pokhari (pond) to be renowned as one of the sacred ponds in Eastern Nepal.

The neighboring villagers also said that Timbung pokhari is a holy pond that can fulfill your wishes if you offer your prayers at this pond with full honesty and purity of heart.

Can sinners visit this sacred pond?

It is also believed that those visitors, who come to this pond with dishonesty, jealousy, and sin in their hearts are not welcomed by this sacred pond. It is said that when such visitors arrive at this pond, the pond is suddenly surrounded by clouds and the weather becomes gloomy. Something ill also might happen to such evil persons.

Death of British Men in search of Chunk of Gold

The water of this spiritually sacred pond is so clear and transparent that even a tiny part of pebbles inside the water can be clearly visible outside. So, there is a story related to the existence of an image of a chunk of gold inside the water during the time of British rule in India. So, as this story spread far and wide, few British people came from India and tried to search for those chunks of gold from this pond water.

However, the British men and their helpers could not find any gold. Instead, five of them died in this pond whose cemetery was laid on the top of petty hills in the surroundings of this pond, which tangibly verifies that this was a fact in the past.

How the pond got its name?

The name of this pond actually stemmed from a Limbu word, “Timbak” which means the “gunfire”. The word “Timbak” later on got distorted to be known as Timbung.

Owing to its name and fame, Timbung pokhari is one of the 100 tourist destinations enlisted by the government of Nepal.

Timbung pokhari found at an elevation of 4335m above sea level is 466m in length and 154m in width and around 675 km far from Kathmandu, which lies on the border of Taplejung and Panchthar districts.

Despite its popularity gradually increasing, it still remains unexplored, because of its remoteness and being inaccessible to roads and transportations.

However, the mystical pond site is significant from both religious and tourist point of view for all potential travelers.

The eye-catching delightful views of snowy peaks of Mt Kanchenjunga and other adjacent peaks can be easily seen from this pond.

Hundreds of thousands of pilgrims, as well as common travelers, arrive at this holy pond each year from across Nepal and India as it is hardly one kilometer away from Nepal-India border.

The famous pond is known for its divine power usually remains covered with snow for nearly six months. The cloudy pond fused with snowy mountains all around makes this place very exotic and spectacular to enjoy. 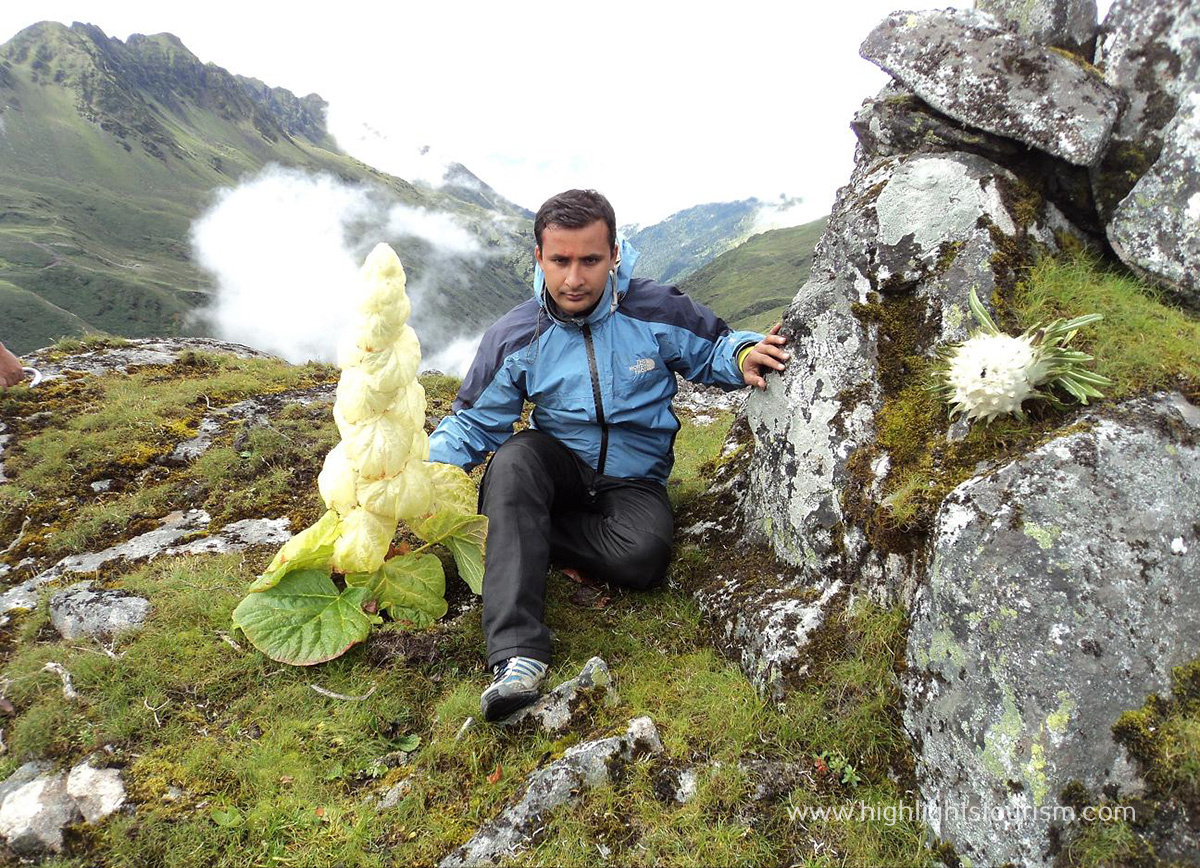 The desert-like place lacking in trees and shrubs in its surrounding has rich biodiversity replete with greenery, blue sheep, ghoral, snow leopard, bear, musk deer and red panda and yaks all along the trail leading to this pond.

An annual carnival is observed on this pond site in the months of Janai Purnima, during which a lot of people throng to see prayers being offered by devotees. 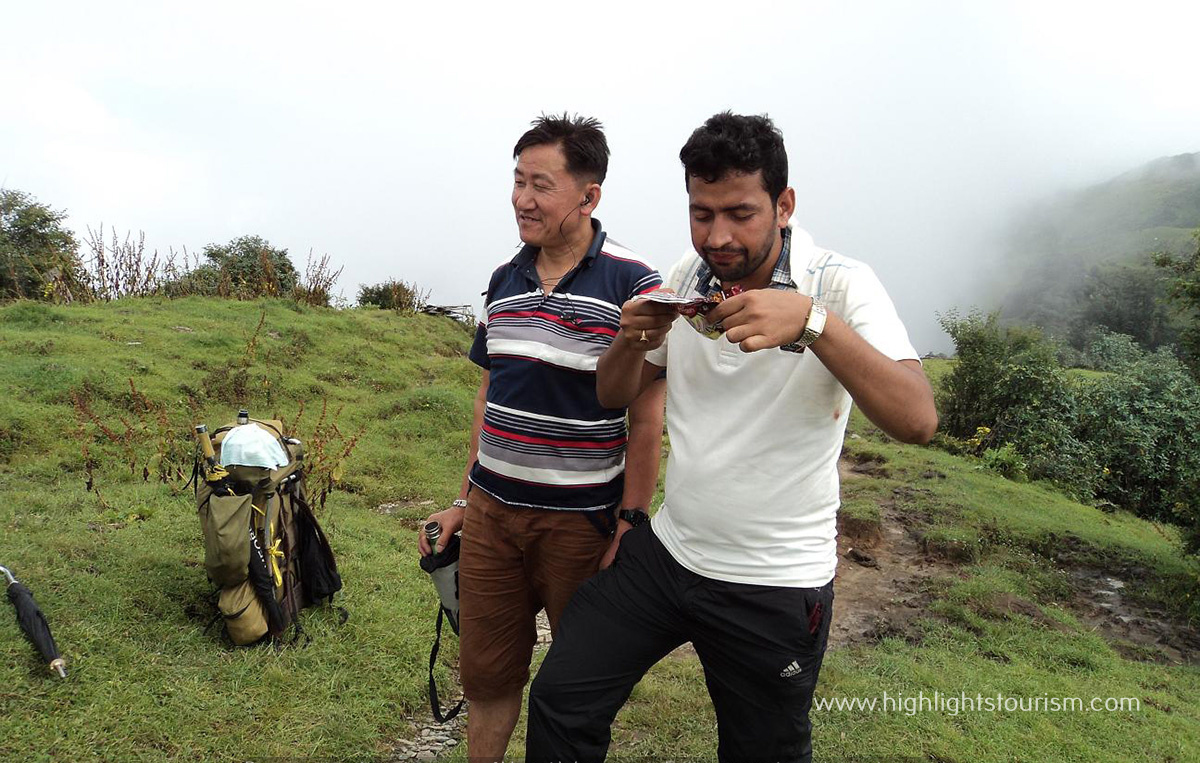 A symbiosis of all religious faiths

Buddhist prayer flags are seen here and there besides symbols of trident used by Hindus. The Kirant Mundhum followers have also left their religious symbols at this site. So, this pond is becoming a religious symbiosis of all religious faiths as well.

The pond is also believed to have not discriminated against any visitors on the basis of birth, caste, creed or color. Such is the spirituality and divinity of this Timbung Pokhari.

However, there are no homestays, luxury hotels to stay in for the visitors arriving from outside. All you have to do is to seek shelter in one of the temporary shelters made for Yak and Sheep.

The former members Mr. DB Rai and Om Prakash Rai of district development committee have played a pivotal role in spreading the information about this divine pond, which is no less than “Rara Lake” of western Nepal. Eye treatment in charge Mr. Kaji Gurung said, “When I come to this pond, I get relieved of all worldly tensions.”

How to get there?

There are several routes to reach Timnung Pokhari. One is to take a flight from Kathmandu to Suketar Airport in Taplejung district, then trek through Tellok and Surukhim to the sacred pond.

Those coming from the Terai region follow Mechi Highway. That is to follow the Birtamode-Charali-Ilam-Panchthar Fidim-Ganesh chowk.

The good time to visit this pond is from March to August.